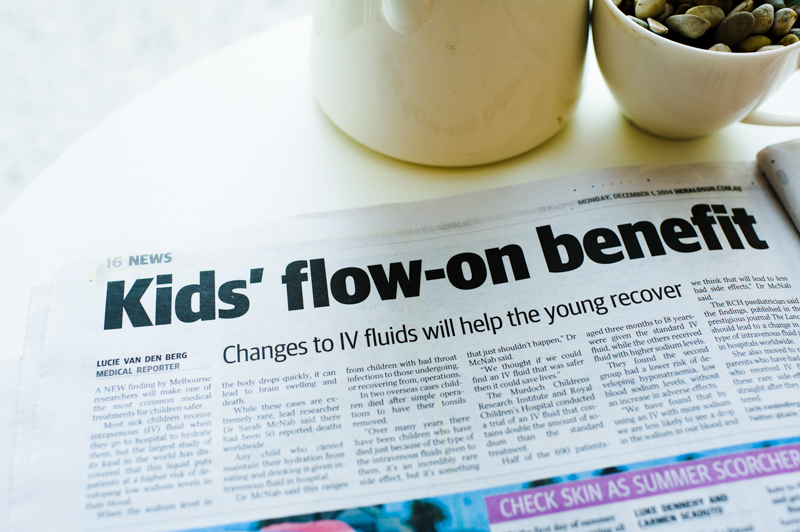 A new landmark study published in The Lancet in December 2014 is recommending hospitals change the fluid due to concerns about possible impacts on sodium levels in the blood.

Lead researcher and Paediatrician, Dr Sarah McNab spoke to Alison Caldwell, from the ABC’s The World Today. The audio of this report is available below.

The study by the Murdoch Childrens Research Institute and the Royal Children’s Hospital is one of the largest and most diverse studies of its kind.

The study showed that children who receive hypotonic IV fluid, which is currently routinely administered to maintain hydration, are at higher risk of developing hyponatremia (a low blood sodium level), which can lead to serious side effects, including death.

Researchers performed the largest and most diverse study of its kind in the world comparing hypotonic IV fluid with isotonic fluid which contains more sodium (77mmol/L vs 140mmol/L).

The study showed that children receiving the isotonic fluid had a lower risk of their blood sodium levels dropping, without an increase in other adverse effects.  The finding should completely change which IV fluid is given to children in hospital all around the world.

Lead researcher, Dr Sarah McNab, said the study should have widespread implications and could change the fluid that is given to all hospitalised children worldwide.

“In this study we have demonstrated that by changing the intravenous fluid we routinely use, we can reduce hyponatraemia – an abnormality that sometimes leads to serious side effects.”

“These findings were consistent across hospitalised children, medical and surgical patients. Based on these findings, widespread changes to intravenous fluid guidelines should be made.”