New Outdoor Smoking Bans to Start at Hospitals and Schools 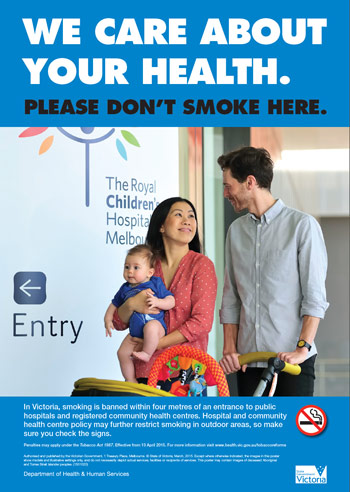 From 13 April 2015, under the Tobacco Act 1987 smoking is prohibited within four metres of an entrance to all Victorian children’s indoor play centres, public hospitals, registered community health centres and certain Victorian Government buildings.

We Care About Your Health – Please Don’t Smoke Here

From today (Monday 13 April), smoking will be banned on the grounds of, and within four metres of an entrance to:

The ban will apply to more than 2,200 primary and secondary schools, around 4,200 kindergartens and childcare centres, and 149 public hospitals and health services across Victoria.

People caught smoking in these off-limit areas risk on-the-spot fines of $147. The maximum penalty under the legislation is 5 penalty units, which is currently $738.

The Victorian Government is committed to reducing tobacco-related harm in Victoria. About 4,000 Victorian lives are lost each year as a result of smoking, and it costs approximately $2.4 billion in direct health costs and lost productivity every year.

Smoking is now also banned at train stations and raised platform tram stops, patrolled beaches, and within 10 metres of playgrounds and skate parks, sporting venues during under 18s events and within public swimming pool grounds.

Need More Information?
For more information on the ban on smoking at entrances to public hospitals and registered community health centres, you can visit
the Department of Health website:
– https://www2.health.vic.gov.au/public-health/tobacco-reform/smoke-free-areas